A true cause for celebration, roughly 700 people including staff, donors and community members came out in force for an impressive peek at the new JCH ER+. 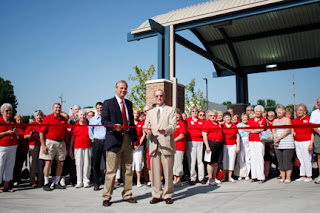 In honor of the new ER+, JCH hosted a two-day community-wide event on June 27 and 28, 2012, complete with guided tours, food, free gifts and lots to cheer about. On Wednesday, a breakfast was held for staff with lovely fruit and pastries to kick off the day. Festivities continued with an appetizer reception to honor all donors in the evening followed by the cutting of the ceremonial ribbon. To wrap up the night, there was an open house for members of the Jersey County Business Association.

Nearly 300 people attended the ribbon-cutting ceremony, while 200 employees and another 200 community members braved the disagreeable heat to participate in the public Open House festivities on Thursday. The reviews were unanimous: “It’s huge, it’s functional, it’s bright, and best of all, it’s right here at home!” This stellar turnout was an amazing tribute to the entire campaign. Exciting highlights of the Grand Opening event included the presentation of a half million dollar check from the JCH Foundation in addition to a generous $2,500 check presentation from the Spring Organ/Tissue Donor Awareness Fundraising Run. 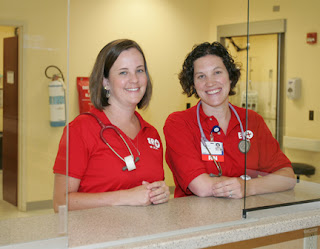 We knew the unveiling was going to be awesome, but I think all were surprised when the barrier between the new and the remodeled area came down. The nurses’ station is beautiful. One eight-year-old visitor said the counter tops “were pretty and looked like they had been sprinkled with pepper.” The well-lit work area is accented by bright yellow walls with shining tile floors accented in navy blue. The finishing touches on the central monitoring system are underway, the computerized medicine cabinet is ready for its final move and the last four patient areas (fourteen in all) are getting their bedside computers and patient televisions. Storage and work space abounds, and the staff is itching to enjoy the convenience of the support areas. But again, we’ll have to wait on the state. Before we can have patient occupancy of the additional four rooms, we have to have a life-safety inspection by the Department of Public Health.  I’ll be calling their office daily to see if we’re on the schedule.

I would like to extend a sincere “thank you” to everyone who made this ER+ project possible and the Grand Opening event such a huge success. Several of the attendees were rather sophisticated in their understanding of the healthcare drama that’s been evolving over time in the United States. It was a great experience to get to meet so many of our supporters.
Stay tuned.

Thank you for visiting and we love to here your comments. We appreciate all feedback.