For those who missed it, here are some highlights from the Jersey Community Hospital Foundation annual “Fall Fling” fundraising dinner…

With a crowd of over 200 people, the evening started out in high spirits with a wine tasting social hour (hosted by Grafton’s Piasa Winery and Two Rivers Winery), a candlelight dinner from Carla’s Catering and Pat Schell’s hilarious video of the Hospital’s Medical Scholarship Golf Tournament, which had everyone bursting with laughter. 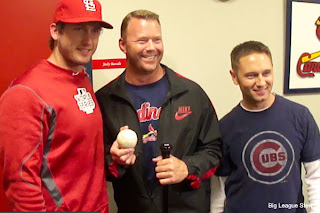 The evening also held a special treat for our guests. Dr. David Huyette, a JCH radiologist, was on hand to recount his recent national media coverage where he grabbed the home run ball that gave the Cardinals their win in the critical 6th World Series game. He told us, “I knew right away that the ball should go back to the hitter, David Freese. It was so exciting to be part of the victory celebration in the Cardinal locker room. I couldn’t sleep for two days!” In return, Huyette received a ball signed by all the World Champion Cardinals and a bat on which the Cardinal’s third baseman wrote, “Dave, Thanks for the homerun ball! Dave Freese.” Guests were allowed to see and be photographed with both items. 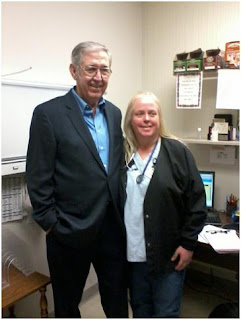 Dr. Donna Boone also was honored at the event as Jersey Community Hospital’s 2011 Medical Honoree of the Year for her invaluable service as an Emergency Room physician at JCH. I shared with the crowd some patient feedback on Dr. Boone, including one where a mother reported that she examined her child’s doll before treating the frightened little girl in order to put her at ease. I also had the pleasure of introducing area farmer, Bob Lahr, who feels personally indebted to the doctor for saving his life. Mr. Lahr had suffered a massive heart attack in August and was rushed by a Medora-area ambulance toward JCH. JCH Paramedics intercepted and continued the trip to the JCH Emergency Room. Dr. Boone and the ER staff worked tirelessly at saving Lahr, using the defibrillator over a dozen times to revive him. Because it was a foggy night, flying Mr. Lahr by medical helicopter to a cardiac care hospital was impossible, so he was again efficiently transported to St. Louis by the JCH Ambulance Service under the care of our top-notch paramedics. While recovering in St. Louis, Mr. Lahr’s family was told repeatedly that his experience was a medical miracle due to the prompt care from Dr. Boone and the ER staff who refused to give up on him. Although Dr. Boone was unable to attend the Fall Fling dinner due to her commitment at the Emergency Room, Mr. Lahr personally awarded Dr. Boone the JCH Medical Honoree of the Year award later that evening at the hospital. What a story!

I also took a few minutes to share with the crowd our progress on the Emergency Room construction, which aims to provide additional privacy, speed of treatment and coordination of care. I further explained how we’re giving specific attention to sound proofing, visitor comfort, additional telemetry and a sophisticated electronic medical record, and that the enlarged “ER+” will include an expanded care team to staff an Urgent Care area for non-life threatening medical treatment. We also discussed the reason for breaking our waiting area into three smaller areas – helping us increase comfort, infection control and seating capacity. Construction on the project is expected to be completed by spring of 2012.

As I told the attendees, the JCH Foundation is over halfway to its goal of $1 million dollars, but donations to the project are gratefully appreciated as we enter the home stretch of our fundraising efforts. Many thanks to the vast number of community members who have donated to this worthy cause through donations large and small, memorials to loved ones and company contributions, as well as to those who have helped support the JCH Resale Shop events such as the Fall Fling. Additionally, hospital employees from all departments have been donating to the ER project through payroll pledges of over $50,000 since the beginning of the campaign, and the JCH Auxiliary recently pledged $100,000 to the project from its earnings at the JCH Gift Shop in the hospital. Although the hospital board was able to secure “Build America Bonds” to finance a good portion of the construction, the Hospital Foundation is asking the public to please consider donating to their Community Hospital this holiday giving season. The money will stay local to be used to save the lives of our friends, family and neighbors which will truly make a difference for the residents of our community.

All in all, it was a fun and important evening. And for those who missed it, it’s an annual event... so plan to attend next year and join us for dinner or golf at the Foundation’s spring 2012 Scholarship Golf Tournament.

Let’s work together to build a better ER. Donate online!

Welcome to my first blog!

Since I’ve decided I’m not too old to use social media after all, I realized some of my daily thoughts and experiences might benefit or be of interest to those in our community. So here goes...

My first point of news is one I walk by every morning. The new JCH ER addition! As many of you know, construction on the facility started a couple months ago and we’re making lots of progress. But just because construction is still going on, doesn’t mean changes haven’t already happened in our ER.

On August 1, we opened the ER Plus program. What does that mean? Well, from 11 AM to 9 PM daily, we’ve added a Nurse Practitioner and another Registered Nurse to the ER staff. We hoped this would help us shorten wait and overall visit times – and I’m pleased to say that it’s working!  We’re keeping a close eye on visit times and in the last two months, we’ve seen good results.  The ER Plus is currently in an adjacent area of the hospital, but it will soon be moving into the new ER once construction is complete.

Speaking of the ER addition, we will be weather tight soon! Interior walls are being erected and we can finally see the outlines of the new space. To learn more about our plans and progress, I encourage you to join us for our annual Fall Fling Dinner sponsored by the JCH Foundation, Saturday, November 5th at the Westlake Country Club. We’ll start out with a wine tasting at 5:30 PM, followed by a delicious candlelight dinner from Carla’s Catering. Reservations can be made by contacting Lynn Poglajen at 498-8392 or lcurrie@jch.org.
Let’s work together to build a better ER. Donate online!